A Bit About Us and Where We’ve Been
A Brief History of the Bio-Bus By Barbara Baumstark, Ph.D. 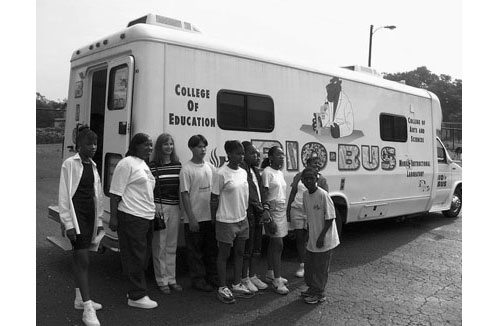 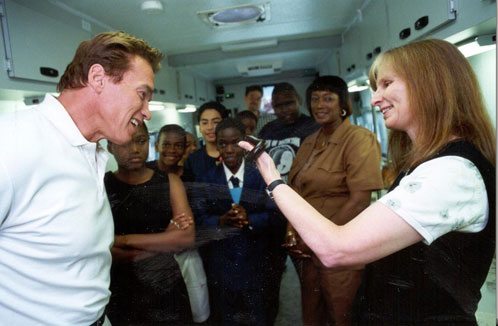 Millie the Millipede and Other Celebrities on the Bio-Bus

The GSU Bio-Bus program came into being in large part because many of our faculty members play dual roles as scientists and parents. As professors who relish the opportunity to teach highly motivated, inquisitive, students, we consistently observe a striking correlation between our college students’ enthusiasm for science and their exposure to hands-on, inquiry-based science instruction during their K-12 schooling. As parents of Georgia schoolchildren, nearly all of us have been asked at one time or another to bring interesting science activities to K-12 classrooms.

Although happy to oblige, we have often been frustrated with the problems of transporting equipment and supplies back and forth in our personal minivans, SUVs, and subcompacts. To our delight, the GSU administration offered us finding to build a mobile laboratory as a safe (and fun) alternative to our haphazard mode of transport. At the Back at Centennial Olympic Park in 2005 – Where We Had our First Gig in 1999 front of Bus is a microscope station attached to a video display monitor, and along the sides are lab benches that can accommodate 12-15 students. The outside of the Bus is decorated a portrait of GSU’s mascot (a bluepanther named Pounce) clad in a white lab coat.

During the first years of its existence, the Bio-Bus was operated entirely by volunteers, with me as ad hoc driver, two or three other faculty members, and several students. Initially, we had planned to start our formal program slowly by testing a few activities at selected schools. We quickly discovered, however, that Georgia teachers are eager for science in all forms. Our very first outing, in 1999, was to Centennial Olympic Park as a last-minute replacement for NASA, which had to cancel. Word-of-mouth recommendations from that one day brought us so much business that we ended up visiting over 50 schools during our first year of operation, and soon found ourselves faced with more requests than we could adequately handle.

Fortunately, in 2001 we secured an NSF grant that provides fellowships for 16 graduate and undergraduate students from biology, chemistry, physics, geology, and anthropology. Each NSF Fellow spends approximately 15 hours a week on the Bio-Bus, where they present activities on topics that extend past the realm of biology into physical and earth science. Due to the backing that we have received from the University and from the NSF,we are able to offer all of our services for free.